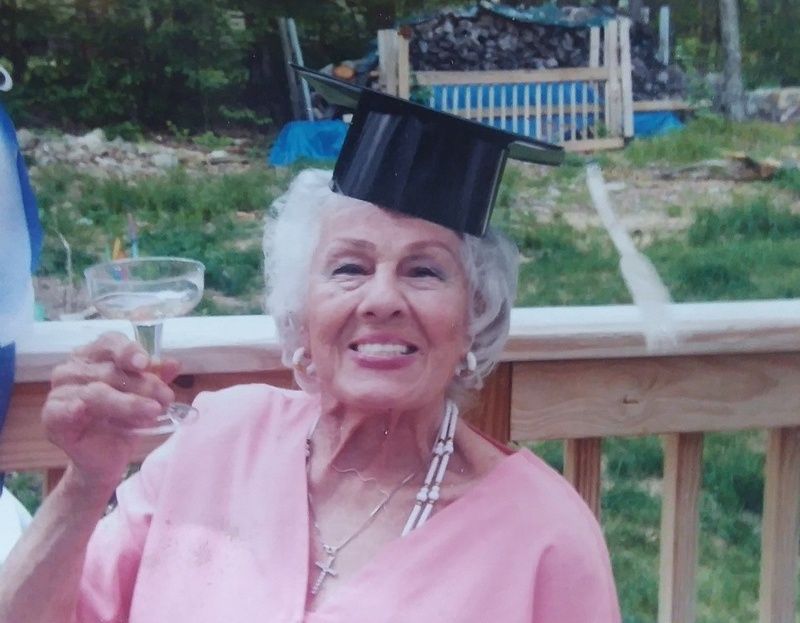 Mary was born in Boston of Italian immigrants from Sicily. Her late parents, Salvatore Fortunato Greco and Virginia Bombaci had five children, the first dying of measles before her first birthday. Raised in Boston at a young age, her family later moved to Roxbury where Mary's life would change forever. At just 11 years old Mary was hit by a car which landed her in a Rehabilitation home for over five years while she learned to walk again. Throughout her life she would endure surgery after surgery as a result of the accident. Mary had both hips replaced - twice, knee replacement surgery, ankle surgery and was told she would need a wheelchair for mobility. She wouldn't hear of it and persevered through the pain and suffering, ultimately walking with the assistance of crutches. Her father, a Cobbler, would hand make her shoes to fit her limp so she could walk with maximum ease. Mary would master the art of crutch throwing at any target from any distance. You did not want to get in her way! Mary graduated Roxbury High School and years later she landed a job at Polaroid in Waltham where she laid eyes on the most handsome man she'd ever seen. They were a stunning couple, and a short time later they married, bearing two adorable children, Judy, and John. The fairytale didn't last long and Mary, a single parent, was forced to make some changes. Mary and her kids moved to Belmont where they shared a two family house with her parents, sister Rita and brother-in-law Cal and their two kids, David, and Denver Holt. The four kids were all very close in age which may or may not have contributed to mayhem when no one was around. Even with her handicap, Mary worked hard as a waitress at night and attended school during the day. Mary graduated with honors from the Bryman School of Medical Secretaries in Brookline.

Mary's father was an avid gardener and fantastic cook. He passed down secret family recipes and gardening tactics known only to those of Sicily's hillside. She loved gardening, cooking, and baking. With Mary gainfully employed as a Medical Secretary, she would regularly bring in homemade eggplant parmesan fresh from the garden. Business was good for the Drs. It was rumored people would fake illness just to get some good ole Italian cooking. Lots of repeat patients and no one left the office hungry. No one.

Mary retired in 1954 and if you ask her, she'd say her children grew up to be rich and famous (that hasn't quite happened yet), bearing children of their own. Judy is the proud mother of her son Jeffrey Brown of NH, and John is the proud father of his sons, Paul, and Calvin Maguranis of MA. Mary met her second Husband, Alfred on a blind date set up by friends where they initially went for ice-cream. She invited him for dinner and the rest as they say, is history. They enjoyed 25+ years of marriage getting together every weekend with Rita and Cal, and Mary's older sister Maisey and her husband Fred. Mary and Freddie moved to Waltham and Rita, Cal, David, and Denver followed shortly behind moving a few miles away. Holidays were always full of family, friends, neighbors, talking, hugging, laughing, yelling, food everywhere, presents, perfume, relatives coming in and out all day long, football games, long naps and then doing it all over again with dessert for round two. Everyone stayed to help clean up and then everyone left for home with leftovers. It was delightfully exhausting. Mary fed every person and animal that crossed her path. She didn't go anywhere without a purse full of peanuts for the squirrels, a bag of bread for the birds and a handful of meatballs for the dogs.

Mary would live on to survive multiple falls and breaks as her tired legs tried to hold up her tiny body. She always pulled through and later, true to form, she beat Breast Cancer, Pneumonia, Osteoarthritis, Alzheimer's, Sepsis (x2), and Covid-19. Mary decided to leave us on her father's birthday probably knowing somehow it would be comforting for us knowing she is in Heaven with her family cooking and baking to celebrate his day, and every day that follows. In the end, Mary passed peacefully and comfortably, not from disease or disability, but rather just simply time to rest in peace.

Besides her children and grandchildren, Mary leaves behind her equally loving older sister Messina DiPietro of Wilmington, MA, and her brother-in-law Calvin Holt formerly of Waltham, MA, now in MT, as well as nieces and nephews, friends, and her favorite dog Lizzie. Mary joins her parents, her sister Rita, brother Joey and sister she never knew, Thomasina as well as her two husbands, many pets, friends, and extended family in heavenly eternity. We will never forget the small person who left such a big impact in this life. Her courage insurmountable, her generosity unmatched, her love immeasurable. We are all better people because of her. Much love until we meet again.

Family and friends will honor and remember Mary's life by gathering for her Funeral Mass on Wednesday, February 3rd at 10:30 a.m. in Saint Jude's Church, 147 Main St., Waltham. Burial will follow in Wildwood Cemetery, Wilmington. Those unable to attend may view Mary's Funeral Mass via this link at 10:30 a.m. on Wednesday: https://my.gather.app/remember/mary-cortinovieri

During any events, public or private, common sense precautions prevail. That includes masks covering your nose and mouth, staying with your household group throughout the services and keeping a sensible distance. Thank you . . . again . . . for your patience and understanding.
To order memorial trees or send flowers to the family in memory of Mary V. Cortinovieri, please visit our flower store.