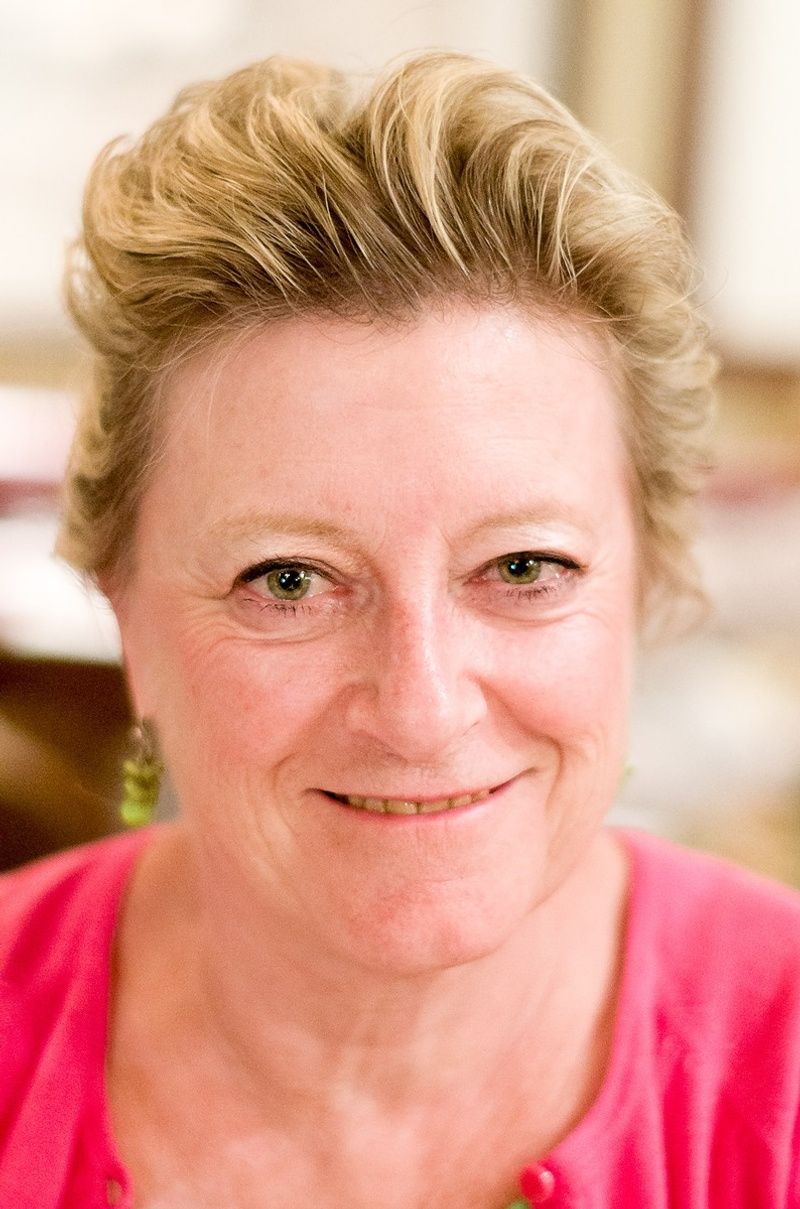 Linsey Rockingham stood at only 4 feet 11 inches but she was a force of nature with which to not be reckoned . . . . 'once met, never forgotten'. She left an outsize impression on all who encountered her.

She had her own distinctive style and was always fashionably dressed demonstrating eccentric and eclectic flair with the perfect complement of color and jewelry…usually items bought on a bargain, which she took great delight in discovering. She was unique and engaging and captivating but most important…genuine.

She didn't have nor need any sign reading, "Good food, good wine…good friends' because in the environs of her 'little English cottage' these three things were always abundant. Linsey loved nothing more than tending to her gardens, sharing the gift of a great table with foods she prepared paired with the perfect wine in the company of her many and diverse group of friends. She was a talented and fearless cook who loved to entertain. She also kept physically active throughout her life, skiing, tennis and scuba diving being amongst these activities, also golf which she originally took up to play with her father.

Born on July 18, 1952 in Ripon, United Kingdom she was a daughter of Rose (Brumhead) Rockingham and the late Philip Rockingham. After spending a couple of her earliest years in Singapore while her father, an RAF officer, was posted there, the family returned and settled in Norfolk, England. After boarding at Wymondham College for her high school years she received her college degree in Computer Programming from Norwich City College in Norfolk, UK.

She worked initially in London and Bristol, UK, but with a drive and curiosity to change life up and explore the States she took a job that was posted in New York City. In 1979 she moved to Manhattan and over time made Governors Island, Greenwich Village, Battery Park City and Roosevelt Island her home while she took in all the city had to offer. But this was complemented by her love of the countryside demonstrated with the purchase of her "country home" in West Stockbridge, Massachusetts where she created from scratch a beautiful garden that became a labor of love that through the years became her oasis away from the bustle of the big city.

Because of her inclusiveness and exceptional talents Linsey succeeded at her many professional positions including Vice President for JP Morgan Chase, Principal at Rockingham Consulting, Director of Marketing for PointCare Technologies and most recently as Global Business Development Manager of Tam Tam Consulting. She travelled the world with her various roles and often clients became friends enabling her to better experience much the world has to offer.

She married fellow UK native Richard J. Phipps on May 16, 1998. They met and lived in New York City until 2007 when they relocated to the Boston area.

They enjoyed many memorable foreign travels together, vacationing in France, Italy, Australia, Thailand, New Zealand, Argentina, and most recently Croatia among others. They visited the vineyards of Bordeaux during their honeymoon in 1998 and returned there to celebrate their 20th wedding anniversary.

Diagnosed with Ovarian cancer back in 2012 Linsey approached the disease and its treatments with an unstoppable and wonderfully admirable positive approach which was typical of everything she did, never letting the disease and diagnosis define or change the way in which she lived her life. She was an inspiration to all her knew her. She succumbed to the disease on Wednesday, December 29, 2021 at home. She was 69.

She was also beloved by her parents-in-law (the late) David and Glenys Phipps who would enjoy visiting from the UK, as did her own family on many occasions. Linsey always made everyone welcome in her house and her garden and her dining room.

Funeral services are private but her family invites you to the livestream and recording of her services on Saturday, January 8th beginning at 1 p.m https://my.gather.app/remember/linsey-rockingham

A Celebration of her Life will be announced for sometime in the summer of 2022 when her gardens are in full bloom and we can gather without restriction to raise our glass and toast our much loved Linsey at her home in West Stockbridge.

In lieu of flowers memorials in her name to Dana Farber Cancer Institute, P.O. Box 849168, Boston, MA 02284-9168 or www.dana-farber.org
To order memorial trees or send flowers to the family in memory of Linsey Elizabeth Rockingham, please visit our flower store.