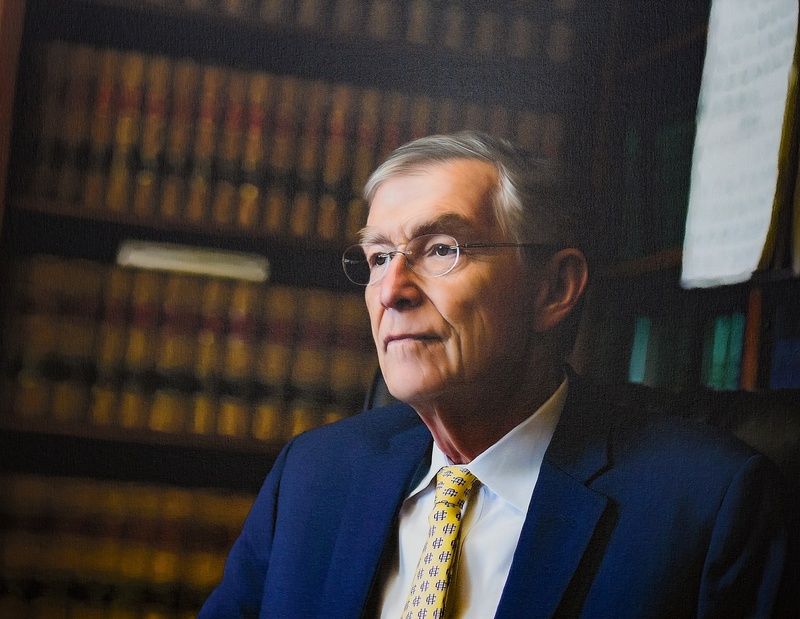 Greg, a Waltham native, was born on December 12, 1951, the 5th child of John J. Flynn, III and Elizabeth H. Flynn. Following Elizabeth's untimely death in 1956, Greg was lovingly raised by Nancy M. Flynn in a family that would include 9 children. He enjoyed a rich childhood including fond memories of his time at Saint Joseph's Grammar School in Waltham and many happy summers in Scituate with his siblings and cousins. Greg went on to attend Xavier High School in Concord and The College of the Holy Cross in Worcester '73, both institutions deepening the strong Jesuit values by which he was raised and would later embrace. He earned his law degree from Suffolk University as well as a Masters of Law in Taxation from Boston University.

Greg's legal career began alongside his father as the 3rd generation of his family to practice at Flynn & Flynn in Waltham. From there, he was appointed an Assistant U.S. Attorney (Boston) in 1980. He later became Deputy General Counsel and subsequently General Counsel for the MBTA before then Governor William F. Weld appointed him to the Waltham District Court in 1993. Judge Flynn served as First Justice of the Waltham District Court for nearly thirty years, where he was a model for how to deliver justice in a local court and took great pride in serving his hometown community. All those that entered his courtroom were treated with fairness, respect and the utmost compassion. Judge Flynn was passionate about education, always seeking ways to further his judicial expertise as well as serving as a valued mentor to new judges as they began their legal career.

Greg was truly a man for others. Be it in the courtroom or over coffee at Ye Olde Cottage in Weston, he always took the time to listen and to help those around him. He had a competitive streak and always maintained a sense of humor, especially during local pickup basketball games. He was dedicated to serving his community, evidenced by his long-term service as a member of the Boards of Trustees at Waltham Hospital, Newton-Wellesley Hospital and Maristhill Nursing Home in Waltham.

A loyal Holy Cross Crusader, Greg could reliably be found in attendance at HC football and basketball games, and took great pride in watching his four children enjoy the same collegiate experience. He was an active alumnus, serving as 1973 Class Co-Chair for many years, and an avid supporter of Holy Cross and its mission, receiving multiple alumni awards for his contributions.

Greg's life was deeply rooted in faith. He was a longtime parishioner at Saint Julia Church in Weston, which he and his wife Joan joined when they moved to Weston in 1978. Over the years, he served St. Julia in many capacities, including as a lector, Confirmation teacher, and member of several building committees spearheading the building of the Parish Center and renovation of the church.

The most important focus in Greg's life, however, was devotion to his family. He and Joan were married in 1975 and welcomed four children, Anne, Rosemary, Patrick and Charlie. They lived on the same street for 43 years and enjoyed the blessings of eight grandchildren. Greg adored spending time each summer on Block Island (RI) with Joan and his children and grandchildren. Until recently, winters included family ski trips, often to favorite Mont Orford in Quebec. Greg took great pride in his role as husband, father, grandfather, brother and uncle, always extending great kindness, compassion, love and a bit of humor to those around him.

Greg was predeceased by his father John J. Flynn III, his mother Elizabeth H. Flynn as well as his sister Mary Louise Flynn.

Family and friends will honor and remember Greg's life by gathering for calling hours at The Joyce Funeral Home, 245 Main Street (Rte. 20), Waltham on Friday, February 4th from 3:00 to 8:00 pm and again on Saturday, February 5th at Saint Julia Church, 374 Boston Post Road, Weston where his Funeral Mass will be celebrated at 10:00 am. Burial will be private. The family kindly requests that all guests are fully vaccinated and wear a mask.

Those wishing to view the broadcast of Greg's Funeral Mass may use this link on Saturday at 10:00 a.m.: http://stjulia.org

The family wishes to extend gratitude to the Dana Farber Cancer Institute, in particular to Dr. Jeffrey Wisch, Dr. Brian Wolpin, and Kathleen Boyle, P.A. for their dedication and unwavering care over the past three years.

In lieu of flowers, memorial donations may be made to Gregorian University Foundation Adopt a Scholar Program (www.gregorianfoundation.org/pope-adopt-a-scholar) or to the Flaschner Judicial Institute (www.flaschner.org/donate)
To order memorial trees or send flowers to the family in memory of Gregory C. Flynn, please visit our flower store.