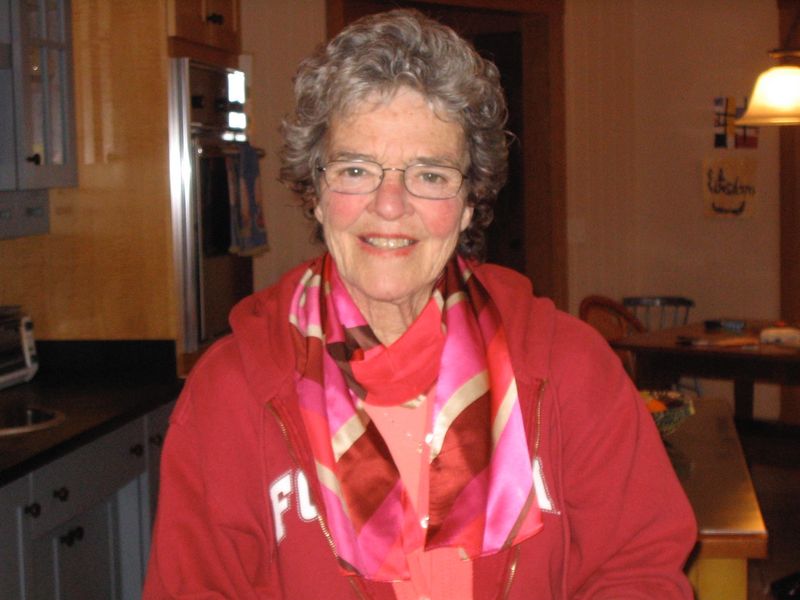 Shrewsbury - On Saturday, May 9th, Ann E. O'Connor, also affectionately known as 'Nan,' was laid to rest in Mountain View Cemetery in Shrewsbury, next to her beloved husband, Frank, known to many as 'Papa.' In a note to her daughter, Jane, Ann had once written, 'I wish you joy realized in the life you give: Happy Mother's Day! And thanks for your beautiful words, spoken and lived.' Ann offered her life joyfully as a gift to all. When she died on Wednesday, May 6, 2020, her heart was full of memories of a life made joyful by sharing grace with others. Amazing grace given is amazing grace received!

Born in Boston on August 12, 1933, Ann was the daughter of George and Anna (Lydon) O'Brien. She grew up in Saint Mark's Parish in Dorchester and graduated as class valedictorian from the former Jeanne d'Arc Academy in Milton. She earned her Bachelor's degree from Regis College in 1954. That summer, at the invitation of a mutual friend, she met Belmont native Francis P. O'Connor on Cape Cod, and they married on September 10, 1955. In June 1962, after living for a time in Medford and Grafton, they made Shrewsbury their home.

Frank, who became a long-time Justice of the Massachusetts Supreme Judicial Court after serving on the Superior Court, was Ann's beloved husband and best friend. Ann and Frank partnered throughout life and grew ever closer in love. They faced many challenges together, including Frank's Alzheimer's disease. Ann loved and cared for Frank until his death in 2007. Now they are rejoined for eternity!

Ann and Frank's life revolved around their ten children. Ann loved and valued the great outdoors and fostered in her kids a love of sports and outside activities of all kinds. She insisted that her kids play outside until dusk, when she would use a cowbell to summon them home. In the summer, she would pack lunches and towels and as many kids as possible into the station wagon to go swimming at Sewall Pond, in the woods of Boylston. Camping trips were the highlight of the summer! The pop-up trailer was filled with food in boxes and clothes in clear plastic bags, and the family headed north to the woods of northern New England and Canada. Nan would lead the chorus in song: 'He's got the Whole World in His Hands' with the name of grandparents and every neighbor on Prospect Street plugged into each new verse, stopping only when they pulled into the campground and set up camp.

Ann was a devoted and engaged parishioner at St. Mary's Church. She supported the parish school, which all of her children attended, in countless ways. She served on the Parish Council, brought Communion to the sick, and planned and assisted with events of all kinds, collaborating actively with priests and fellow parishioners to build the community that served as her second home. She loved to attend retreats led by the Passionist Fathers at the former Calvary Retreat House and was a member of the Cursillo Movement. She and Frank also served the Diocese of Worcester in several capacities, giving as they received, by spearheading the Family Life Apostolate and preparing couples for marriage.

Ann had her own way with words! She would rise to her feet at celebrations to proclaim generous messages in rich poetic phrases, never using a short word when a long one would do. Even when a particular word choice was unconventional, her message of love and support was clear.

Ann made each family member and friend feel welcomed at 56 Prospect Street. The large wrap-around porch there provided many with a haven for sharing joys and sorrows. Everyone knew that the key was in the mailbox! Dinner was served in more than one seating to welcome guests or accommodate kids' athletic events. Sundays were a day of rest for Mass and family only. The tennis court in the backyard, dubbed the "Sudden Debt Tennis Club," was a place for players of all ages to gather and the location each Labor Day weekend of a tournament to raise funds for Mass Citizens For Life, a cause profoundly close to their hearts.

After Frank died, Ann walked every day on the quiet paths of Mountain View Cemetery, where she often sported a t-shirt that read "All who wander are not lost." Though she may have wandered, she was never lost! The bookshelves at her home were filled with guidance from her favorite spiritual authors, and she shared them bountifully. Wherever located, her home was warm and purposeful and filled with life in all its complexities. Her Bose radio played round-the-clock classical music to keep her company while she read Henri Nouwen, James Martin SJ, and the Community Advocate. Like her mother, she never left her rosary beads out of reach, praying for any and all in need.

In addition to Frank, her parents, and his parents, Ann has joined her brothers John L. and George E. O'Brien and sisters-in-law Joan and Mary Frances O'Connor in heaven.

Given these extraordinary times, services were held privately. In lieu of flowers, memorials may be made to the Home for Little Wanderers, 10 Guest Street, Boston, MA 02135.

Arrangements by James & John Heald of The Joyce Funeral Home.
To order memorial trees or send flowers to the family in memory of Ann E. (O'Brien) O'Connor, please visit our flower store.